You are here:
My Quadratic app 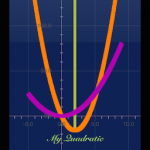 For a long time, I have nurtured a dream of creating an interactive graphing Math book. Mathematics is a subject that provides solutions to life problems from simple purchases at the local market to the complex flight paths of spaceships to other planets in the universe; from the concentration computations of chemical solutions in the laboratory to the compound interest calculations at the financial institution.

Mathematical theory is rather difficult to understand if there is no way to visualize how it looks and feels. Models and graphs help. Interactive models and graphs will definitely bring enjoyment to studying.

With the continuous advancements in mobile computing, an interactive graphing Math book can now be realized where mathematical theory with interactive graphing features can be in the hands of hundreds of millions of people in the world, anywhere any time. My dream has come true with the first iPhone app – “My Quadratic”, and more educational and scientific apps to come. My Quadratic app can be downloaded from this link:
https://itunes.apple.com/us/app/my-quadratic/id1066053060?mt=8

The world is really flat. Education must be universal!